If you are ever contemplating suicide, but lack the intestinal fortitude to actually go through with the act, you might try and do what this man did at the Cleveland Indians game yesterday. 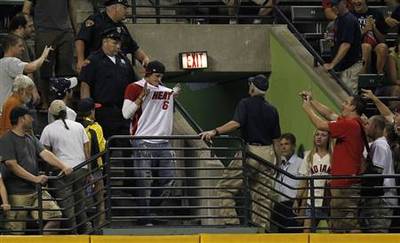 Dumbass of the year?

For those who don’t understand what is going on in this pic, let me explain. The white and red #6 Miami Heat jersey is Lebron James’ new jersey. For those of you who have been in a coma all summer, Lebron just left the fine city of Cleveland, “taking his talents with him to South Beach”. In the process he took the biggest dump in the history of dumps on Cleveland and it’s fans. Cleveland already boasted the world’s most bitter fans as a result of a long and storied history of gut-wrenching failures.

Now here comes this asshole, wearing the very embodiment of all of the misfortune Cleveland fans have had to endure. The Cleveland Indians are not helping things any, as they are being pummeled by the NY Yankees of all teams en route to an 8-0 loss. How much abuse can these fans take?

After the crowd started chanting obscenities at the man in the James jersey, police escorted him out of the stadium. By the looks of things, this guy was looking for a fight. Do you see him in that pic? Does he look like he is trying to exit gracefully? He looks like he has a fucking deathwish!

If I were that guy, I’d get the hell out of Cleveland, ASAP! Would anyone be surprised to find him choked out in a parking lot with his jersey shoved up his ass? I wouldn’t.