For those who are not familiar with the first two seasons of the Boondocks, well, what the hell are you doing with yourselves? You missed out!

This beef started when Thugnificent and his lethal interjection crew moved out of their hood in Terra Belle, GA, and moved into Grandad’s upscale suburb of Woodcrest. After dealing with his fair share of loud parties and other disturbances, Grandad filed a formal complaint with the Woodcrest community board against Thugnificent. Thugnificent and his crew responded by putting out a diss record entitled “F Grandad” (seen in the attached video).

The song is fucking great. Aside from Thugnificent (voiced by Carl Jones), there are also lines by Lethal Interjection members Macktastic (Snoop Dogg) and Flonominal (Bustah Rhymes). The hook is even done by Nate Dogg!

Grandad made a response video on youtube that sucked pretty bad, but it was still hilarious. Soon after Thugnificent and Grandad decided to squash the beef because the “F Grandad” song was leading to old men all over the country getting their ass beat for no reason. The two held a press conference and hugged, while whispering the following exchange to eachother:

#9 Most Lol-Worthy Rap Beef of All Time

# 10 Most Lol-Worthy Rap Beefs of All Time

So I’m sure that all of you have heard the news by now that Michael Phelps was caught smoking a bong. A big bong. Yes a bong with weed in it. Now when I first heard the news it was during the Super Bowl and alot was going on. I didn’t really have time to process this information. It wasn’t until yesterday evening that this info really sunk in. Michael Phelps, America’s sweetheart, idol for teenie boppers all over the world, and role model for countless other children, was dumb enough to let someone take a picture of him smoking a bong. 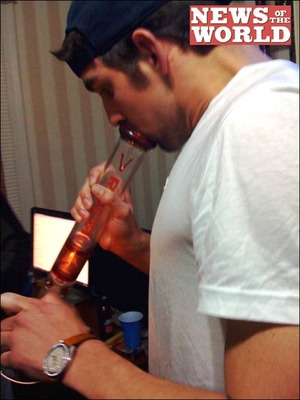 Now granted, Michael is 23 years old. You might be saying to yourself, “When I was 23 I was smoking weed more often than Snoop Dogg!

” Yes this is true. But when you were 23 you were also working as a mailroom intern and not being paid millions of dollars to do so. I don’t care if I’m 23, 12, 65, or 5, if you give me millions of dollars to be a spokesperson for you, that might be sufficient motivation for me to put the bong down. Or at least be really careful where I use it.

Now if the bong incident isn’t enough for you, then lets take a closer look at this. After the photo surfaced, Phelps admitted to using cannabis. He issued a statement apologizing to his fans for this “regrettable behavior” and promised to never do it again. Now lets take a trip in the way back machine, all the way to 2004. Phelps issued a similar apology at that time after pleading guilty to a DWI. “I’ve learned from this mistake and will continue learning from this mistake for the rest of my life.” Hmm. So apparently “the rest of my life” was code for four years. After his DWI Phelps was sentenced to probation, but his image stayed pretty much intact. He did not take a hit with his sponsors and went on to do all of the great things he was destined to do. As far as all the fans and sponsors he had apologized to were concerned, he had kept his promise. There is a famous saying that goes; “Fool me once, shame on you. Fool me twice, shame on me.” Well this is twice Michael. So lets see what the sponsors have to say this time around.

– Speedo called the 23-year-old American a “valued member of the Speedo team.”

– The IOC said Monday it was confident Phelps would learn from his “inappropriate behavior” and continue to serve as a role model.

So basically, when all is said and done, the sponsors are ignoring this again. Looks like shame on the sponsors this time, if you ask me. I am not saying I want Phelps to suffer at all. I do not wish ill on him. He is a good guy I believe. But if you’re asking me if he still deserves to get paid millions of dollars to sell stuff to our children, the answer is no. Pat Forde of ESPN.com summed it up pretty well:

“The age and impressionable nature of Phelps’ marketing constituency carries with it limitations that he clearly was not ready to live with.”

So I’ll leave you with this question. Do you think Michael Phelps would have gotten the same treatment if he was a black man? Two free passes? Really?

Well I think you know what I think.

See With Your Eyes

There was an error retrieving images from Instagram. An attempt will be remade in a few minutes.